The renewable energy market in the United States is both young and rapidly growing. In 2018, California passed a mandate that required all new homes being built to have rooftop solar power generation capabilities, and in April 2019, the United States at-large consumed more renewable energy than coal, proving that the demand for green, renewable power generation is on the rise, as consumers are increasingly growing more concerned with the effects of their own carbon footprints and of climate change in general. This is evidenced by data from 2019, when residential and commercial consumption of renewable energy increased nearly 6%; this growth is expected to increase futher in 2020. These increases will be even greater depending on the results of the upcoming United States elections, where the currently favored democratic party has pledged to implement green bills with stipulations involving residential and commercial solar.

Enter SolarEdge Technologies, which receives over 45% of its revenues from the United States, and the vast majority of its remaining revenues in Western European countries, which are currently making strides to having net zero emissions as evidenced in the Paris Climate Accord that these countries have agreed to. The company is currently expanding their operations and revenue streams in countries that are calling for renewables, making them have a high potential for growth.

SEDG has had drastically increasing year over year revenues. From 2018-2019, SEDG’s revenues increase 52.1%, showing the profitability of this strong growth industry and company. Recently, the company announced that it would not reach its revenue targets for the year 2020, causing the price per share of the stock to quickly drop in the past week. However, this decline can be attributed to COVID-19 pushing back the launch of the company’s new residential battery system which will be competitive with their rival, Enphase. Their revenues also stalled in the second quarter due to lack of installation availability because of COVID-19, but in the third quarter of 2020, SEDG posted strong results which are attributable to an uptick in residential sales for its solar inverters and power optimizers in North America.

SEDG has recently taken a dip in its per share value due to the effects of COVID-19 restricting them from meeting their Q2 and Q3 revenue expectations. Regardless, the stock is still performing well above the S&P 500 and will continue to do so in the future with a 25% LT growth rate. The stock recently reached its all-time high of $305.35 on October 9th, 2020, but fell shortly after into the $200 range due to COVID complications. With new products from SEDG being introduced and a previous year revenue growth of 52.1%, this solar stock has some sunny skies ahead.

SEDG has increased by 117.23% YTD and over a 52-week period has increased by 159.50%. The 52-week high-low for SEDG is 67.02 – 317.88. The top institutional stakeholders for the company have been increasing their positions in the company over the past year and will hold these positions as the price of the stock continues to stay on an upward trend. 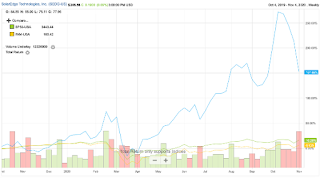 SEDG has strong topline growth in their future with their new solar products being rolled out in the coming months. On top of that, with the company’s LT growth rate of 25%, the companies rapidly growing revenues due to their innovative products, and the recent macroeconomic and political developments, SEDG will see steady growth over the next few years. Because of these factors, the 52 week high that was hit on October 9thshould be at least retested by the end of the first quarter of 2021, and SEDG should remain as a part of the AIM International Portfolio. 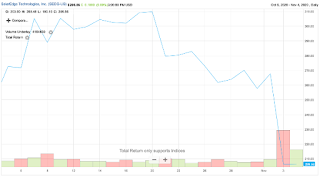