• First REIT to invest a significant amount of capital into solar energy, with only several other REIT’s just getting started.

• The Biden presidential win will help the entirety of the renewable energy industry, more specifically HASI, and will significantly hurt fossil fuels like oil and coal.

Key points: Hannon Armstrong Sustainable Infrastructure Capital, Inc. has been able to distinguish themselves as the first major player in the newly developing sustainable REIT industry. Other REIT’s are finally starting to realize the profitability and potential and are slowly tip toeing into sustainability. It is expected that HASI will remain the dominant player in the coming years and grow at a significant rate due to their pipeline.

It is very well known that Millennials and Generation Z’s are pro-environment and pro-sustainability as many of these individuals have been expressing their beliefs a lot lately. A plethora of people voted for Joe Biden in early November solely because of his plans that are focused on helping the environment. President Trump had no plans to implement environmental and sustainability regulations and policies during a second term as President. Furthermore, Trump made it aware that he was in full support of the fracking and oil industries, which many environmentalists were unhappy with. Now that Biden will be taking over the White House in January, some of his first regulations to be implemented will be environmentally and sustainability focused.

HASI has beat their past four EPS quarterly reports and is poised to beat again in December. Their most recent EPS consensus was 0.26 in September, and HASI beat that consensus with a 0.28 EPS, representing a 7.69% surprise. On November 4th, the day after the election, HASI closed at $42.83. As of November 18th, the stock price was $52.43 and has continued climbing. Biden’s presidency was the macroeconomic catalyst that this company has been waiting for.

Past Year Performance: HASI has increased 82.56% in value over the past year. During the March Covid-19 selloff, HASI saw a low of $15.01 and has seen an impressive recovery. Currently, the price of HASI is sitting at $52.43 and should continue to see growth as renewable energy and real estate thrive. 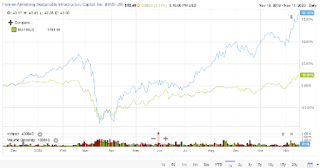 Renewable energy, energy efficiency, and other sustainable infrastructures are the future and will eventually put an end to fossil fuels. With the recent Joe Biden presidency, he has plans to help significantly reduce methane and carbon emissions, along with a 400B dollar investment in clean energy over the course of 10 years. I anticipate that Biden’s presidency alone will help launch HASI’s share price to a level that has never been seen and will help HASI to become one of the fastest growing REITS in the next four years. Additionally, I will not be surprised if HASI is the best performing REIT in the AIM portfolio, and if not one of the best performing holdings. 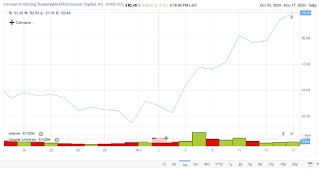 Posted by Marquette AIM at 6:52 PM