A Small Cap Equity holding:Dicks Sporting Goods (DKS, $58.51): “Sports are back Stronger than Ever” by: Matt Schembari, AIM Student at Marquette University

• Dick’s Sporting Goods, Inc. (NYSE: DKS) is a full-line sport store that is located in the United States. They have carried apparels from all the big sporting companies.

• Dick’s Sporting Goods has extreme loyal costumer, with their Scorecard Loyalty Program brining in 70% of their sales. This is important with all the uncertainties in the world with COVID-19.

• Dick’s Sporting Goods has had a big e-commerce year due to COIVD. They are also in many long-term real estate investments which can limit Dick’s ability to switch out of some locations.

• Dick’s Sporting Goods has stayed in the family. The current CEO is Edward Stack, and he is the son of Dick Stack who founded the company.

• Although in quarter two for Dick’s was the main reason why their growth YOY was 42%. I believe there will be an increase in quarter four.

Key points: Dicks Sporting Goods remains a very promising Stock with the ability to continue and have a great fourth quarter. During the third quarter their revenue ended at 2.24 billion. They have also increased EPS by 1.05 during the third quarter, and I only see it growing headed into the fourth quarter. They also hold a higher gross margin then most of their competitors during the quarter three.

Dick’s Sporting Goods has been adapting well to COVID. Every company has had to make changes constantly and are trying to figure out the best ways to still make a profit while making their employees happy. Dick’s did end up having to close 15% of the stores which they own. This would cause some worry to some companies, but Dick’s focused their attention on making their e-commerce stronger. Dick’s was able to increase their e-commerce sales by 160%. Secondly, with the COVID they have focused on pushing more social distanced sporting products such as golf, which has increased almost 50% during COVID.

Dick’s Sporting Goods also has a great private label. They have been focusing on growing this more recently. Dick’s does a great job offering items that are well represented from the NCAA, NBA, and FIFA. This gives them a great source of revenue from well-known apparel distributors. They also have a great private brand which brings in 14% of their sales. This is only behind Nike which is one of the most well-respected sporting apparel stores in the world.

DKS is trying to constantly give back to the community and know everyone is struggling during this challenging time. Dick’s Sporting Good teamed up with LISC in early November to invest in more the $12 million to the Black Economic Development Fund. This fund is to help lower the racial wealth gap. Dick’s Sporting Goods also is offering a “10 Day of Black Friday”. The reason of this is to offer people sales for a longer period and to try to limit the crowded stores on Black Friday.

Since early November till currently there has been an increase in the stocks price. It has increased more the $5 EPS in the last month, which came at the same time of investing 12 million into the Black Economic Development Fund. Over the past quarter the price of the stock have gone up almost $4 per share. The increase over the entire quarter and the increase in the past month shows the company is on a strong trend upward.

Past Year Performance: DKS has increased the valuation by 20.79% over the past year. While saying this I do believe the company is still very strong and still currently being undervalued. The 52-week range has been $13.46 - $63.29. This is an extremely large range which seems so big but can be reasoned with the fact that COVID-19 happened. With the growing of e-commerce sales of 160% over the last year DKS has great upside.

Dick’s Sporting Goods constant growth in the e-commerce section of the company is growing more than this last year with an increase of 160%. Even though there was a slight drop in sales in the third quarter I believe there will be a bigger increase in the fourth quarter. Dick’s has a great private brand that they are trying to grow, along with bringing in sporting apparels from key sporting vendors like the NBA, NCAA, and FIFA. Finally, DKS is constantly trying to offer and help the community around them by offering a longer black Friday sales in order to lower the spread of COVID-19 and also investing in the Black Economic Development Fund. 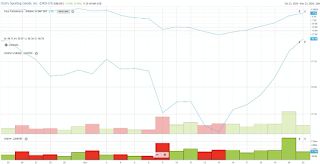 Posted by Marquette AIM at 6:55 PM