-       Ameresco, Inc. Class A (AMRC, 69.01) is an innovative company that engages in the provision of energy services and solutions for businesses and organizations throughout North America and Europe.

-       AMRC’s energy service lines of business include energy efficiency solutions, infrastructure upgrades, asset sustainability, and most other renewable energy solutions. The U.S. and Canada segments of the company offer energy efficiency products and services such as design, engineering, and installation of equipment and other measures to improve the efficiency and control the operation of a facility’s energy infrastructure.

The cost to produce solar power, and more specifically, utility-scale solar power, has decreased rapidly and dramatically over the past few years. In fact, over the past eight years, the price of solar power has dropped 84%, and costs are continuing to decrease. The International Energy Agency has recently stated that solar power is now the “cheapest electricity in history,” meaning that photovoltaic solar energy is cheaper than both natural gas and fossil fuel energy. As of August 2019, the United States consumed more renewable energy than coal, showing that the demand exists for a newer, greener power source as consumers are growing more concerned about their respective carbon footprints and about climate change overall. While natural gas is still viewed by most as a clean energy source, it still does not address the problem of being more expensive than photovoltaic solar, making photovoltaic solar an in-demand product for both businesses and consumers, as evidenced by 2019 data stating that both residential and commercial consumption of renewables increased nearly 6%, a rate which is expected to increase even more by the end of 2021 due to the Biden administration’s highly anticipated Green Bills.

Enter Ameresco, Inc., which receives over 94% of its revenues from the United States, one of the fastest growing solar markets in the world alongside China and India. The United States recently rejoined the Paris Climate Accord due to the Biden administration making the fight against climate change one of its top priorities. AMRC is currently expanding its operations and revenue streams in the United States, which is, again, a country increasing their demand for renewables.

The company has a highly sustainable and profitable business model, which expands earnings at a faster rate than revenue by growing their higher margin recurring lines of business. The very nature of AMRC’s business model is profitable at this point in the company’s history due to the residual nature of their revenue streams. The company’s revenue has steadily increased YoY, and its EBITDA will continue to grow at a faster rate than its topline due to the company’s ability to hold residual customers in turn dropping expenses.

Despite the COVID-19 pandemic, AMRC saw steady growth in 2020 that has continued on into 2021. The company took  on new high volume projects throughout 2020 and continues to do so in 2021 as evidenced by its recent deals with Wells Fargo to install PV solar generation assets at nearly 100 Wells Fargo properties. The stock is performing well above the S&P 500 benchmark, and just in the past three months has seen 60.75% growth of its per share price. As of today, February 9th, AMRC reached its highest per share price in its history and will continue to grow because of strong residuals supporting the company’s topline while shrinking expenses as they relate to common size. With an increasing clientele base and supporting macroeconomic factors, Ameresco is a clean, green, earnings machine.

AMRC has increased by 28.6% YTD and over a 52-week period has increased by 228.83%. The 52-week high-low for AMRC is 13.38 – 69.73. The top institutional stakeholders for the company have been increasing their positions in the company over the past year and will hold these positions as the price of the stock continues to stay on an upward trend. 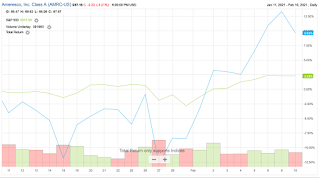 AMRC has strong growth potential in upcoming years due to the macroeconomic drivers coming from the Biden administration, and also due to increased solar demand out of India and China where the company plans and expects to grow their market share in upcoming years. With a LT growth rate of 16.7% we can expect to see this company continuing to increase its per share price. Because of all of these factors, AMRC should remain in the AIM Small Cap Domestic Fund.

Posted by Marquette AIM at 8:30 AM