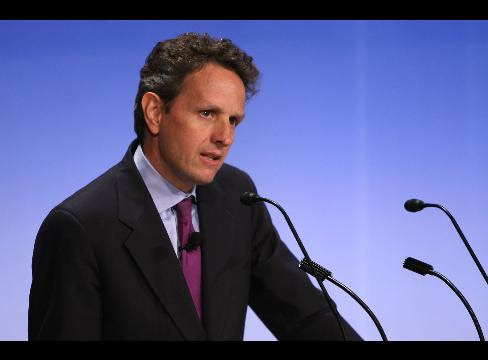 Treasury Secretary Timothy Geithner drew laughter when talking about the safety of the U.S. Dollar while speaking at Peking University in Beijing.

"Chinese assets are very safe," Geithner said in response to a question after a speech at Peking University, where he studied Chinese as a student in the 1980s. His answer drew loud laughter from his student audience, reflecting scepticism in China about the wisdom of a developing country accumulating a vast stockpile of foreign reserves instead of spending the money to raise living standards at home.

"We have the deepest and most liquid markets for risk-free assets in the world. We're committed to bring our fiscal deficits down over time to a sustainable level. "We believe in a strong dollar ... and we're going to make sure that we repair and reform the financial system so that we sustain confidence," he said.

Geithner also offered strong backing for a bigger Chinese role in international policymaking. "China is already too important to the global economy not to have a full seat at the international table," he said.

The students in the audience at China's top university burst into laughter when U.S. Treasury Secretary Timothy Geithner said the Chinese government's investments in U.S. dollar-denominated assets are safe. "Chinese assets are very safe," Geithner said. "We believe in a strong dollar ... and we're going to make sure that we repair and reform the financial system so that we sustain confidence."

In his first official visit to China, U.S. Treasury Secretary Timothy Geithner urged the Asian giant to increase flexibility of its currency in exchange for fiscal reform in the U.S. "A successful transition to a more balanced and stable global economy will require very substantial changes to economic policy and financial regulation around the world," he said. "But some of the most important of those changes will have to come in China and the United States."
Posted by AIM Program at 6:12 AM