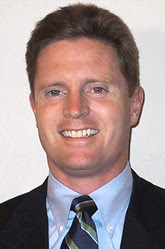 Where is the market heading? How does an investor play potential bubbles? And what are some of the biggest potential surprises that could be awaiting investors over the next 12 months?

These were some of the issues that The Wall Street Journal asked Marquette alumnus, Thomas Digenan, manager of the UBS U.S. Equity Fund, based in Chicago.

What’s your perspective on where we stand in terms of the markets and the economy?

THOMAS DIGENAN: Before I even get into that, I’ll just give you a little perspective, a frame of reference in terms of how we do things. Everything we look at is from a discounted cash-flow analysis: How much would I pay for a business if I was a cash buyer of the business? And when I look at the market, we look at it in a similar way in terms of, if I was to value the overall market, how much would I pay for it, what kind of future cash flows are going to accrete to me as the owner?

The big challenge in looking at the market in this type of environment is that, whatever your valuation methodology, you have to have certain assumptions. And when we value a business, one of the assumptions that we have is that these companies are going concerns. Well, that’s not such a safe assumption in this type of economy.

One of the things that’s really fascinating in this type of environment is that, from a portfolio-positioning standpoint, right now I want to be long risk, short safety, and that’s if I’m looking at the portfolio at 30,000 feet. But if you’re looking at it at ground level, you want to be long safety. And the example I would give is, I wouldn’t necessarily buy an exchange-traded fund on auto-parts manufacturers, but there are some auto-parts manufacturers I’d buy as much as I could, because the survivors are going to benefit. And there are survivors. So I think that to the extent you can do the work and identify the survivors from the non-survivors, you’ll be compensated for that.

So at 30,000 feet, we find the market very attractive right now. And that’s all we’re trying to do, compare price to fair value.

One of the themes that has emerged in the past few years is bubbles. You had the Internet and tech bubble. You had the real-estate bubble. Before that, you had the Japanese stock-market bubble. So, is it wise to look for where bubbles are going to be and chase those?

MR. DIGENAN: The one thing I would say, if you’re trying to predict the next bubble, just say, “Where is capital free?” Wherever capital is free, people don’t tend to spend it wisely. If I give my 12-year-old $200 and say, “Go to the store,” he’s probably going to waste it. And I think we saw that. Capital was free for tech. Capital was free for housing. So look for the next area where capital is free.

The one thing I think that’s really important when we’re in this type of extreme is that, whatever your investment philosophy, you have to look at it and you have to have some true north—“This is what we stick with.” And ours is comparing price to fair value. And I would say our biggest challenge is that, when price exceeds fair value, even if we’re in a bubble, we can’t chase it, because we try to make money off what we know, and what we know is price and fair value.

Is the Worst Over? When you look at the market right now, there’s still a fair amount of fear. Do you think the worst is over in terms of the crises we saw in the fall and again in February-March? Or do you think we’ll retest the lows?

MR. DIGENAN: If the economy—if the worst is not over, the market is going to go through what the lows were. But I think we are through the worst on the economy. In the market, I think my biggest challenge is from an investment standpoint, when you do have a lot of people saying, “Well, we’ve had this run-up, but it’s a bear-market rally, and it’s going to give back here,” and they’re holding off. They’re waiting.

I have no insight into what the market’s going to do in the short run, but the one thing I would be cautious of is it’s these same people that didn’t want to go in in March. They were kind of waiting. There were a lot of people that had capitulated in March, and they were completely out. And what I told advisers at that point was, if you have a client, and they’re getting out of the market, and they’re demanding out of the market, have them write you a letter. And sign it, and date it. And basically, that letter has to say, “I’m not equipped to handle the risks of equity investing.”

That’s OK. It’s not a bad thing. Some people are not equipped to handle the risk of equity investing. And then when the S&P hits 800 or 900 or 1000 or 1100, and they want back in, you cannot let them back in. You can’t. It isn’t punishment. It’s basically a realization that these people are prone to that type of behavior. And if you do let them back in, you only let them back in if they’ve been re-educated, if they said, “Look, I realize that I wasn’t looking at price to fair value in looking at this short-term trade.”

We’re going to close with one surprise about something that might happen in the next 12 months that’s unexpected.

MR. DIGENAN: I think commercial real estate would probably be it. It still has potential to be a very large problem. That could be the one area that could really lead to maybe some counterparty risks.
Posted by AIM Program at 8:38 PM