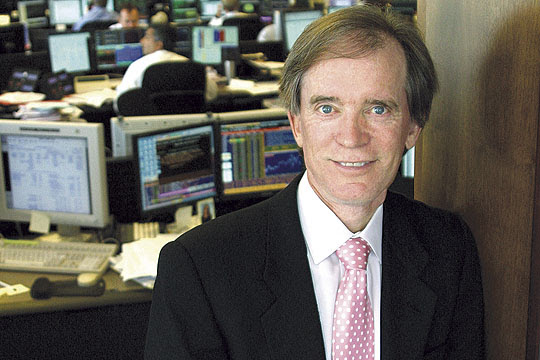 Investors are concerned that stimulus efforts might spark a rise in prices, prompting them to flock to inflation-protected U.S. Treasuries. The yield gap between 10-year nominal notes and 10-year Treasury inflation-protected securities exceeded 2 percentage points for the first time since Lehman Brothers collapsed in September. The developments suggest investors expect annualized inflation to surpass 2% during the next 10 years.

It was probably just a matter of time. Pacific Investment Management Co., the home of bond fund maven Bill Gross and the world's largest bond fund manager, registered Tuesday for exemptive relief from the Securities and Exchange Commission to enter the exchange-traded funds market.

Although its filings still weren't up on the SEC's Web site in the morning, PIMCO officials confirmed that they've started the process to come out with a series of bond ETFs.

The first will track the Lehman Bros. Aggregate Bond index, one of the most widely followed U.S. benchmarks. Other ETFs on the market following that same benchmark include the $9.3 billion iShares Lehman Aggregate Bond index (NYSEArca: AGG) and the $1.8 billion Vanguard Total Bond Market ETF (AMEX: BND).

"We think it's a very logical extension. We view the ETF as an important delivery mechanism for our strategies," said Tammie Arnold, a managing director at PIMCO. The Newport Beach, Calif.-based firm now manages about $224 billion in U.S. mutual fund assets. "We have a long history as an active manager," Arnold said. "In respect to our ETF effort, we're evaluating a variety of strategies, both active and passive."

PIMCO also has a large separate accounts business. "We view the ETF business as an important additional vehicle for delivering strategies to our clients," added Arnold. Through June 30, PIMCO managed a total of $830 billion in assets. "Now, we're adding ETFs as another important vehicle," Arnold noted.

The first of PIMCO bond ETFs are likely to follow third-party benchmarks. That indicates at least a passive, or even quantitative, strategy. But with a successful record of managing active bond portfolios, can it be long before an active bond ETF is introduced by the fund giant?

The first active ETF was actually a bond fund. That's the Bear Stearns Low Duration Portfolio (AMEX: YYY), which launched on March 25. Its assets aren't readily available on Bear Stearns' Web sites. But a May tally of top ETFs by IndexUniverse.com found YYY had about $50.2 million in assets. That's barely above the nearly $50.1 million it started out with (most likely through seed money Bear Stearns figured it needed to create enough liquidity to launch an ultra-short bond fund).

On April 11, the Invesco PowerShares Active Low Duration Fund (NYSE: PLK) came out. It was also marketed as an active bond ETF. But it has only attracted about $2.5 million in assets so far. By contrast, bond ETFs as a whole had slightly more than $45 billion in assets through June, according to the Investment Company Institute, an industry trade group. That was just a fraction of the nearly $578.1 billion in assets for ETFs as a whole. But it represented a big leap from $25.9 billion a year ago.

"PIMCO's entering the field is great news for the ETF marketplace," said Tom Lydon, a Newport Beach, Calif.-based advisor who also runs ETFtrends.com. "We're still near record lows in terms of interest rates," he added. "With stock markets down, a proven asset manager like PIMCO could be entering at a very opportune time."

The ETF market has seen many new bond competitors come into the field during the past 18 months, he notes. "What PIMCO is probably positioning itself to do is become a major player by getting into bond ETFs early in the game," Lydon said, noting that fixed-income ETFs didn't start proliferating in the marketplace until last year.

A big question, however, is how active PIMCO's offerings will be as its lineup grows. "As of today, there are no active ETFs in the marketplace that don't offer daily transparency," Lydon said. "It'll be interesting to see if PIMCO's filing will attempt to do anything different—if and when they actually enter the active bond ETF market."
Posted by AIM Program at 6:26 AM