The Bonneville Multiple Sclerosis event I wrote about before was just completed and it was a huge success. My brothers' efforts raised over $3500 for the MS research fund. Thank you to everyone for their generous donations.

As for the event itself----- it was awesome. There were nearly 1000 cars and motorcycles from all over the world. 50cc Hondas going 70 mph to 400 mph streamliners. As for my brother's effort, his Mustang ran flawlessly. He was the first rookie driver to qualify for an A license - which means a sustained speed of over 200 mph. His family was present the day he broke 200, so it was a joyous celebration in the pits. Again thanks to everyone - here's the picture of the car on the Salt Flats. 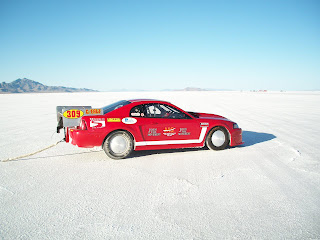