The November University of Michigan consumer sentiment index increased to 64.1 from the October reading of 60.9, and up from 55.7 in August.
The gauge of consumer sentiment reached  the highest reading since June.  A preliminary reading for November pegged the gauge at 64.2. 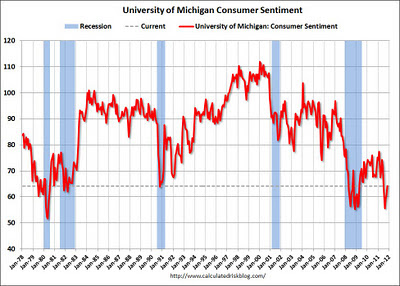 Calculated Risk - a finance and economics daily blog - reported that consumer sentiment is usually impacted by employment (and the unemployment rate) and gasoline prices. But right now the European financial crisis is probably also impacting sentiment. Although sentiment is up from October, this is still a very weak level.
The personal saving rate was also released today. It was a reported 3.5% in October. Personal saving -- Disposable Personal Income less personal outlays -- was $400.2 billion in October 2011, compared with $376.9 billion in September. Personal saving as a percentage of disposable personal income was 3.5 percent in October, compared with 3.3 percent in September. 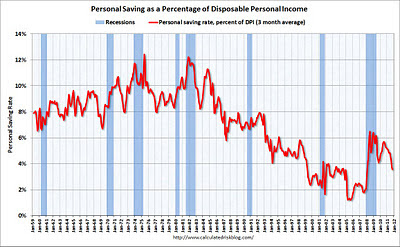