Infosys Ltd. ADR (INFY, $15.76): “Can Infosys Regain its Footing in After Brexit?”
By: Yiqiu Zhu, AIM Student at Marquette University

• Infosys Ltd. (NYSE:INFY) is a global leader in consulting, technology, outsourcing, and next-generation service. The company, along with all its subsidiaries, provides Business IT service, consulting and system integration service, Business Platform innovation, and emerging technology.
• Infosys had a really good run over the past two years, the stock reached its all-time high of $20.47 on April 15th 2016.
• Due to the potential impact from Brexit and missing the earnings target in Q1 2017, Infosys’s stock dropped from $20.47 per share to $15.6 per share.
• Infosys lowered its revenue growth target in the year ending on March 31st, 2017 from a target growth between 11.5% and 13.5% in constant currency term to a target growth between 10.5% and 12%.
• Market might be overacting to the event that happened to Infosys, the stock could have the potential to rise back to $19 per share depend on Q2 and Q3 earnings results.

Key points: The market has a very negative reaction on Infosys missing its earnings estimates for Q1 2017. The company’s stock dropped more than 9% on July 15th. This big drop in stock price is just a result of many problems that Infosys is facing right now.

When Dr. Sikka joined Infosys in 2014, he set up an ambitious target that he will turn Infosys into a $20 billion firm by 2021. In the beginning, Infosys did have very good growth in revenue and it had been continuously beating the earnings estimates for three quarters. As a result, the stock is in an upward trend since 2014 and reaches its all-time high of $20.47 on April 11th 2016.

However, after April 16th 2016, the market condition became worse for Infosys. First, Infosys’ chief operating officer said spending by clients remains volatile and may hurt the company’s margin in the short term.

Second, Britain’s vote to exit the European Union leaves Infosys with little visibility to the company’s future performance because 23% of Infosys’ revenue comes from Europe. Infosys’ CEO Vishal Sikka said that: “In the near term, we don’t know how Brexit will affect us and so forth”.

After all that happened to Infosys, the market starts to worry if Mr. Sikka, CEO of Infosys, is just too optimistic about Infosys’ future and set up a goal that is above Infosys’ ability to achieve. 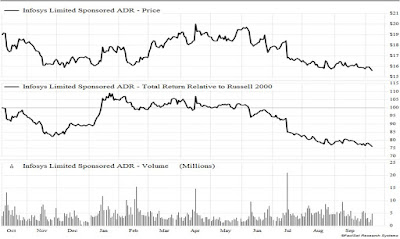 I think Infosys’ stock price gets beaten down too much recently with all the unfavorable conditions in the market. Many people worried that the volatile client spending would not only hurt Infosys in short term but also hurt the company in the long term, however, we have to keep in mind that the global IT market up 6% in 2015 and it is estimated to keep the growth momentum in 2016. Also, people worried about Brexit might have negative impact on Infosys.

It is true that Brexit will hurt Infosys’ revenue, but Infosys only has 23% of the revenue comes from Europe, which is the lowest among Indian IT giants. Infosys should be the one that is least affected by Brexit. Therefore, I think market slightly overreacted to the events that happened to Infosys. Moreover, If Infosys’ Q2 and Q3 earnings results turn out to be better than what market expects, the company’s stock could have the potential to bounce back to $19 per share.