• Tata Motors Limited (NYSE:TTM) is India’s largest automobile company. TTM provides automobile products consisting of commercial and passenger vehicles. They also engage in a handful of related ventures. Included in this is engineering and automotive solutions, construction equipment manufacturing, and automotive vehicle components manufacturing, just to name a few.
•Announced September 21, Tata has entered into a new Strategic Partnership Agreement with longtime ally and lubricant giant, Castrol.
• During Q2, Sales of Medium and Heavy Commercial Vehicles (M&HCV) grew by 7.8% Y-o-Y while the Light Commercial Vehicles (LCV) segment grew by 11.6% Y-o-Y
• Earlier this month, TTM announced having received orders for over 5,000 buses from 25 City/State Transport Undertakings across the country.
• A 9% growth in Q2 sales by Jaguar Land Rover did not translate to higher profits as the Brexit vote hurt European currency value.

Key points: Tata Motors Limited is a company that continues to evolve within the forward thinking and technology crazed automotive industry. The India based manufacturing company continues to see strong growth across a variety of its segments.

As AIM alumni Ryan Bailey foresaw when he pitched TTM in the fall of 2013, we have seen a major investment in ground transportation across India. For example, the commercial vehicle segment has been a major asset for Tata Motors within the last few years. They have seen growth across the board, especially in the small commercial vehicle space where they corner the Indian market. The Tata Ace had its tenth birthday last year and considering it is currently India’s number one mini truck, there was much to celebrate. In fact, the Ace now owns 85% of the segments market share and accounts for 20% of all commercial vehicles within India.

On the other hand, the government is also shelling out money for investment in new high tech buses that will include such things as GPS, onboard Wifi and electronic destination boards. After multiple years of relatively low investment, it was announced on Sept. 6 that Tata will be filling orders for over 5000 buses from over two dozen STUs. The big surge has been a good indicator of government investment in public transportation.

Although there has been a lot of good news as of late, Tata Motors has also had to deal with some adversity. The company added Jaguar Land Rover (JLR) in 2008 as a subsidiary. The segment has done well and was acquired to help diversify their vehicle offering. Unfortunately, the subsidiary is based in the U.K. and the recent turmoil in Europe has negatively affected profits. Despite a 9% growth in Q2 sales, JLR did not see higher profits with a major factor being the Brexit vote hurting European currency value.

TTM stock currently sits at $41.51 dollars a share. The price peaked at $44.79 during the first week in September. This price surge took place after Tata reported strong August numbers and coincided with the good news about Tata obtaining the government bussing orders. Since then, the price has dropped back towards its value at the beginning of the month.

Past Year Performance: Tata has increased by over 75% in value compared to this time last year. The company’s stock price spent much of the last year in the mid-$20’s to low $30’s price range before breaking out this summer and it currently resides at over $40 a share. Despite a small setback when Brexit hit, TTM saw continued upward momentum before stagnating this month. 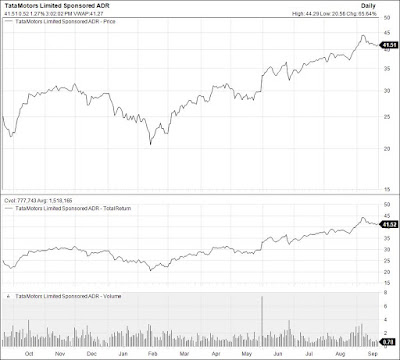 Tata has seen good performance from both its operating segments and stock price over the last twelve months. There are sure to be some bumps along the way but the company has been moving in the right direction and still has room to grow. The ideal placement in the growing country of India and the macroeconomic tails winds will be helpful to the company moving forward. It is unlikely we will see the stock price grow by over 75% within the next year, although more modest gains are quite feasible. 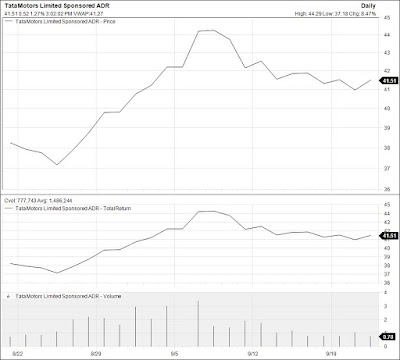