On October 27, Dr. David Krause (AIM program director) and Chris McGuire (Founder and Chief Investment Officer of Phalanx Capital Management) hosted a breakout session at Marquette University's Circles event in Chicago. Dr. Krause and Chris met in an informal setting with more than 30 Marquette alumni at the annual networking event held at the Union League Club in downtown Chicago. The entire event was sold out with more than 300 Marquette alumni in attendance.

Dr. Krause and Chris McGuire discussed hedge funds in general terms and commented on the trends in the current investment market. While the discussion was general in nature, they did have an opportunity to talk specifically about how financial regulations were impacting individual hedge funds, including Chris' firm. Phalanx Capital Management is an Asian Volatility Multi-Strategy Fund with offices in Chicago and Hong Kong. The fund was named "Best Multi-Strategy Hedge Fund Award 2009" by AsiaHedge. 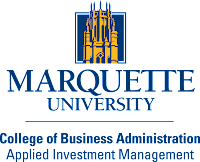 Following the general discussion of hedge funds, Dr. Krause opened the floor up to questions from the audience. At least 10 questions were fielded by McGuire and Krause before the session ended. Dr. Krause said, "It was a good gathering. The attendees to the breakout session asked excellent questions. If the purpose of the Circles event is to bring Marquette alumni together with similar interests in a networking environment - then the evening was a success. It was also nice to catchup with former AIM and other students I've had the pleasure of teaching at Marquette."
Posted by AIM Program at 3:11 PM