Things are looking up for the U.S. economy - according to the AIM student survey

This past week the students in the AIM program submitted their detailed forecast for the U.S. economy in 2011. Dr. David Krause, AIM program director writes, "Even though this week has significant events (election day on Tuesday, the highly anticipated 2nd round of Federal Reserve quantitative easing (QE2) announcement on Wednesday, and the release of the October employment report on Friday), it appears to the students in the AIM program that the U.S. economy will be rebounding a bit more strongly than consensus estimates. The the tone of the current U.S. Senate and House campaigns has been negative and highly critical of the bailouts and stimulus spending - with many people claiming these are a failure. Overall, it appears that this assumption could be wrong and that the bailouts and stimulus will propel the U.S. economy forward in 2011. According to the AIM students, the climate will be improved in 2011 (especially with gridlock between the executive and legislative branches of the government) and growth for the U.S. economy will likely surpass the consensus economic estimates for 2011." 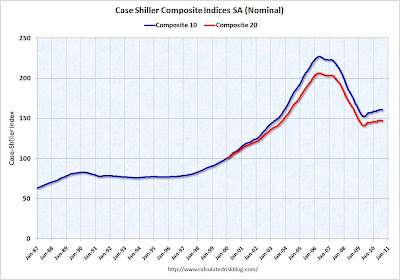 He continued, "Over the past couple of years, I've told my students and others to watch the Case-Shiller housing price index and when it bottoms out this will be a favorable indicator for the recovery of the U.S. economy. This past week the composite August Case-Shiller monthly index (a 3 month average of June, July and August, which is shown to the right) was released. And while the index showed that housing prices are off 29.2% from the peak, it also shows that nationally housing prices have plateaued. While many economists are predicting that housing prices will continue to weaken more in 2011, the AIM students are forecasting a positive increase in residential investment." 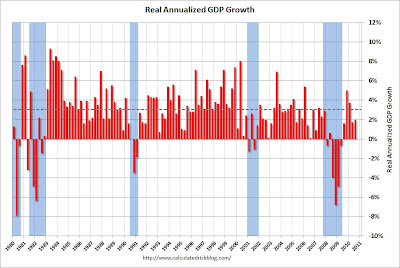 "Real gross domestic product (the output of goods and services produced by the U.S. economy) increased at an annual rate of 2.0% in the third quarter of 2010," according to Krause. "This 'advanced' estimate was released by the Bureau of Economic Analysis on Friday.The GDP growth rate of 2% is well below the 3% average for the last 30 years; however, prospects for 2011 according to economists are 3%. The AIM students, on average, are looking for 2011 GDP growth rates to improve throughout the year and to be in excess of 3.5% by the fourth quarter of 2011. The thought is that the stimulus and bailouts will have a far more favorable impact than most economists and politicians have been predicting. The students feel that U.S. exports will be stronger than expected because of the weaker U.S. Dollar and business investments will lead the economy in 2011. Additionally, auto sales and other final sales - led by a slight improvement in consumer demand - will surprise many economists and pundits on the upside." 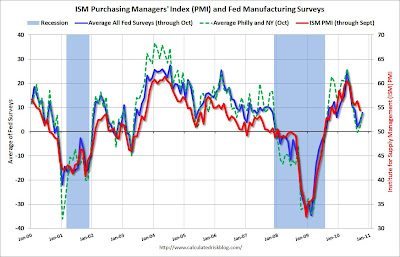 "This past week the regional Fed manufacturing survey showed "moderate" expansion in October (blue line). The graph on the right is from Calculated Risk and includes the average of the New York and Philly Fed surveys - and other Fed districts (green line). The Institute for Supply Management's (ISM) Purchasing Managers Index (red) is also shown. The  graph and the Index of Leading Indicators (not shown) are suggesting that the threat of a double dip recession has passed and that expansion is likely in 2011," said Dr. Krause. 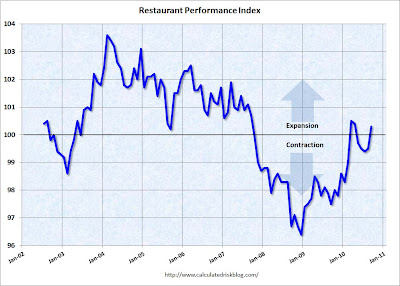 "Other indicators point toward improving conditions for the consumer in the U.S. Driven by improving same-store sales and higher levels of customer traffic, the level of optimism among restaurant operators - and their 2011 outlook - have improved. The National Restaurant Association’s Restaurant Performance Index – a monthly composite index that tracks the health of and outlook for the U.S. restaurant industry – was over 100 the past month which signifies expansion in this leading consumer sentiment indicator," commented Krause.

"The AIM student macro-economic and interest rate forecasts are used to set the strategy for the AIM Fixed Income Fund," Dr. Krause added. "This week the students will adjust their fixed income portfolio based on their 3- and 6-month economic forecasts. In an upcoming blog we will summarize their fixed income investment strategy and underlying assumptions. As you can tell from the comments above, the consensus of the AIM students is for a stronger economy in 2011."