NEW YORK—The Marquette University Applied Investment Management (AIM) team advanced to the semi-final round of the Americas Regional of the CFA Institute Research Challenge.  The event was held in at the Hyatt Grand Central Hotel in New York City on April 9 and 10.


The members of the Marquette University Applied Investment Management team for 2012 are pictured below following their quarter-final presentation. They are (from left to right): Alice Wycklendt, Harrison Davis, Bronson Wetsch, Colleen Osborne, and Jacob Bear. This is the farthest that a Marquette CFA team has gone in the Americas competition – congratulations! 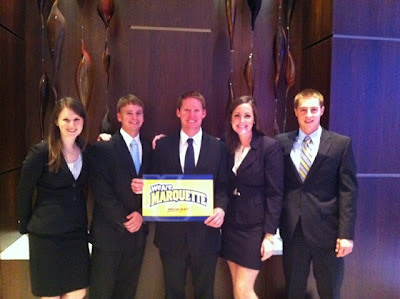 The AIM team’s path to the event began when they defeated four teams in the CFA Society of Madison’s event in March to earn their spot in the Americas competition. On Tuesday, Marquette’s AIM team faced-off against teams from 45 universities in the Americas Region, earning a spot in the Americas semi-finals after advancing through the quarter-final round. They were eliminated before reaching the final round by the University of Hawaii – Manoa. The 2012 CFA Investment Research Challenge global winner, Thammasat University, was determined on April 11 during a competition that included the winners of the Americas, European, and Asian regional competitions.

During the competition for the CFA Institute Research Challenge title, the AIM team gave an oral presentation that summarized their research and recommendation of The Marcus Corporation (NYSE: MCS), a Milwaukee company operating movie theatres and hotels in the Midwest.
The team’s research and conclusions were based on interactions with senior executives at Marcus, investment thesis and risks analysis, financial modeling, valuation, comparable benchmarking and scenario creation. All participants were introduced and held to the CFA Institute Code of Ethics and Standards of Professional Conduct.
The CFA Research Challenge competition is an educational initiative that was established to promote best practice in research among the next generation of financial analysts, and to provide students with an insight into the investment industry. Additional information on the Research Challenge and its participants can be found on the CFA Institute website, www.researchchallenge.org. 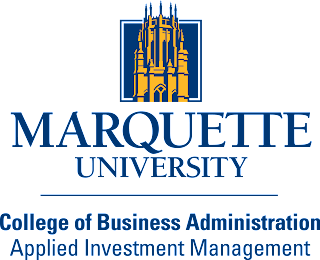