• Discover Communications, Inc. (NASDAQ: DISCA) is a media company that specializes in providing content via distribution networks and arrangement.

• DISCA beat earnings estimates for their second quarter and are heading into announcing the third quarter results on November 5th.

• Discovery, Inc., DISCA’s holding company, announced that they would be offering certain holders of five existing notes, the ability to exchange each of the five for one, new series of the company’s senior notes due in 2055.

• The joint venture between DISCA and Cyfrowy Polsat (Polsat) has been referred to the Polish regulator by the EU Commission.

• Discovery selected Magnite to reinforce the direct to consumer advertising in the United Kingdom, Japan, and India.

Key points: DISCA is a worldwide leader in the entertainment space. Since COVID has impacted the economy worldwide and DISCA’s products are available in 120 countries in almost 50 languages, the company was bound to be impacted. Since the impact of COVID-19 hit, the company has kept busy.

On August 5th, DISCA announced second quarter earnings with revenues and adjusted OIBDA declining 12% compared to the prior year quarter with $879M free cash flow and $0.77 adjusted EPS. This comes in ahead of what the street anticipated, with revenues and adjusted OIBDA falling almost 14% and an adjusted EPS of $0.70. While the company was able to manage expectations for the second quarter, what comes in the second half of 2020 is unknown.

Discovery Communication, Inc. is a wholly owned subsidiary of Discovery, Inc., along with and Scripps Network Interactive. Recently, the holding company announced that they would be offering certain holders of the five existing notes of their subsidiaries, the ability to exchange each of the five for one, new series of the company’s senior notes due in 2055. The corresponding notes were originally due in 2037, 2040, 2042, 2043 and 2047. Only qualified institutional investors and non-United States persons are able to exchange their notes. This act is a move to enhance liquidity for the company in the midst of the post-COVID environment.

In late 2019, DISCA and Polsat entered into an agreement to begin a joint venture together internationally. This 50/50 venture would be an over-the-top streaming venture, initially set to open in Poland. The intent is to expand across other countries over time, however it has been a slow approval process for DISCA. Just recently, the EU commission deferred the decision on the joint venture to the Polish regulator, as that is where the joint venture will first begin.

On September 29th, Magnite, the world’s largest independent omnichannel sell-side advertising platform, and DISCA announced a relationship expansion. In this, Magnite is developing a custom solution for DISCA, allowing them to target, measure, and report the capabilities of their advertising capabilities more efficiently. The goal of this is to bring Discovery’s inventory to a greater number of advertisers looking for highly engaged audiences internationally.

After the EU Commission referred the joint venture between DISCA and Polsat to the Polish regulator on August 28th, the stock dropped 6%. The stock rallied over the next three weeks, regaining 13% of its price. Then, after being downgraded to neutral from overweight by JPMorgan on September, 23rd, the stock fell 12%. Since, it has regained 2% of its value.

Past Year Performance: DISCA has decreased 18.77% in value over the past year, but the stock is still recovering from the loss it suffered due to COVID-19 outbreak: the company is currently trading at a 7.51 P/E versus the 5-year historical average of 33.7. The company has reinitiated buybacks after the COVID-19 outbreak, but has limited it to 50% of free cash flow. 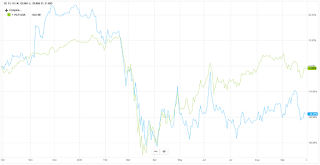 DISCA has seen considerable headways given the COVID-19 pandemic, but has taken appropriate actions to mitigate downside for the company. These actions include some investments internationally, while working to strengthen their core business in the United States. The company has significant headway in front of them, given the existing economic shutdown in the United States, but as does the rest of the communications industry. DISCA is poised to shine in the midst of an economic recovery. 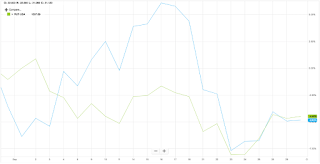 Posted by Marquette AIM at 7:30 PM