• SJW Group (NYSE: SJW) is a regulated water utility company operating in California, Connecticut, Maine, and Texas. The company added their operations in CT and ME through an all cash acquisition of Connecticut Water in August 2018. The company was founded in 1985 and is headquartered in San Jose, California.

With the new rate case in Connecticut expected soon and a new rate case for California expected for 2022, SJW is positioned well to see increased rates across most of their customer base. The vast majority of their revenue comes from those two states, so any increase in the rates would have a material impact on the company’s revenue.

Another potential increase in revenue comes from the AMI application. Management argues that the installation of AMI would help California achieve their water conservation goals, which include timelier leak detection and more efficient water use. The program would cost around $100M, which is on top on the $1.2B CAPEX budget. California regulators are expected to announce a decision on the AMI proposal in 4Q2020.

In 2008, the California regulators released mechanisms to allow the water utility players to promote conservation without having to sacrifice revenue. This also helps the utilities recover costs when a drought occurs. The regulators did not extend the mechanism contract to SJW in December 2019, which caused them to have to decrease 2020 guidance in 1Q2020 due to lower surface water. There is still an opportunity for SJW to work out a deal with the California regulators, although nothing has been proposed.

Since reporting their 2Q2020 earnings on August 7, SJW is down 14.18% to $60.11. The Russell 2000 is up 0.29% over the same period. This underperformance comes as investors await news regarding the AMI application and the new rate cases. In addition, the 2Q2020 print was nothing special, just narrowly missing consensus by $0.02. 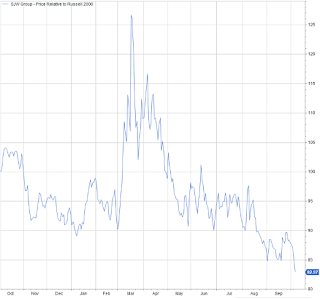 Although the stock has been underperforming since their second quarter earnings call, there is still life in the stock. With the potential for revenue increases from the new rate cases and the AMI application, SJW is positioned well. The impact from the current California droughts should be over, and there is a chance that SJW receives approval to use a mechanism to smooth out costs during a future drought. I recommend that we hold our position in SJW and see where the regulators decide to set the rates at and if the AMI proposal gets accepted. 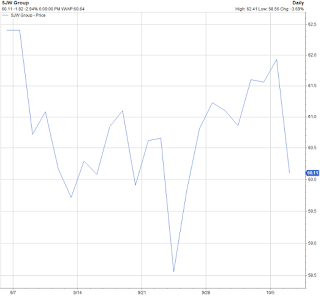 Posted by Marquette AIM at 6:51 PM