An International Equity holding: Nippon Telegraph and Telecom Corp. (NTTYY $20.95): “A Little Bit of Everything” by: Alec Feygin, AIM Student at Marquette University

Nippon Telegraph and Telecom Corp. (NTTYY $20.95): “A Little Bit of Everything”

• Overseas sales have grown at an average pace of 2.9% in the last three years.

• Nippon is currently near 52-week lows and has lost over 20% of its value since being added to the AIM portfolio in February of 2018.

Key points: Nippon serves as both a public utility and a private company. It is the largest telecommunications provider in Japan and currently services over 65% of all people in Japan. Nippon leads almost all companies in the effort to create a secure cyber world. The company has over 30,000 cyber security experts and continuously wins awards for its excellence in creating cyber security standards worldwide.

Nippon has continued to diversify its geographic footprint, but the vast amount of its revenue (over 80%) still comes from Japan. When this company was pitched it was estimated that international sales would continue to grow at double digit rates. In reality, the growth of international sales has been an average of 2.9% in the last three years. Nippon has increased its R&D efforts and has continued to partner with leading companies around the world. Most recently it announced a partnership with Microsoft that will see the two companies collaborate on safe enterprise solutions to help businesses continue to transition online.

Nippon’s main medium-term strategy is to create a new standard for different “smart technologies” that will be used in “smart cities” throughout the world. This standard is called IOWN and its goal is to create more efficient uses of our internet resources. According to Nippon’s website, “IOWN comprises three main technology components: “all- photonics network” that uses optical processing on not only networks but also device pro- cessing; “digital twin computing” that enables high-speed, real- time interaction between things and people in cyberspace; and Cognitive Foundation®, in which these and various other ICT resources are efficiently managed”.  If IOWN is successful it would mean that cities around the world will have a standard in efficiently utilizing the IoT revolution that has long been coming.

The stock in the last month has gone down another 6%. This could be do the uncertainty of the total market and little tangible results after the year-end earnings call that happened on October 2nd.

The past year has not been good for Nippon’s stock. The stock is down over 17% and after recovering slightly from the drop in March, is almost completely back down to the March lows. It is trading at 11.2 P/E which is in line with what it has been for the last four years. 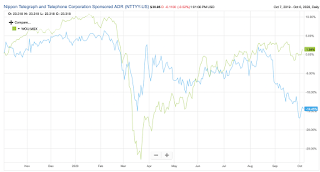 This is a company that is too big to ever fail. It is down over 20% since the AIM portfolio bought it, but most of that downturn has happened in the last year. Nippon is still the largest telecommunication provider in Japan and one of the largest in the world. Its shares are still selling at a deep discount relative to its sales and earnings. We’ve had this company for 2.5 years and my recommendation is that we hold it until something materially changes about it. In a world filled with uncertainty our portfolio can benefit from something that we know will be with us for the foreseeable future. 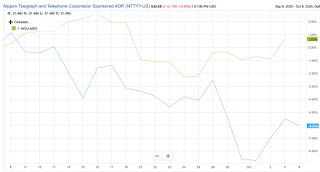 Posted by Marquette AIM at 6:41 PM