Trinity Biotech (TRIB, $12.04): “1Q16: Despite Weakness, No Need for a Heart Attack”
By: Ryan Woo, AIM student at Marquette University 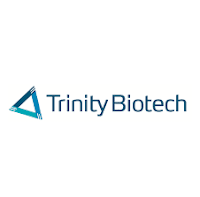 Summary
• Trinity Biotech Plc. (NASDAQ: TRIB) develops and markets specialty medical diagnostic products. Its two revenue segments come from clinical laboratories and point-of-care. Its devices serve to identify autoimmune, infectious and sexually transmitted diseases and liver and intestine disorders. The company is currently in FDA approval stages for Troponin and BNP diagnostic products, which are leading indicators for heart attacks.
• TRIB reported 1st Quarter results on April 19, 2016. The company missed on both sales and EPS relative to average sell-side estimates due to continuing headwinds in the company’s core business from FX, weather, and unusual disease patterns.
• However, shares were only slightly negative on a flat tape -- investors continue to be focused on commentary on its Troponin products, which continues to be positive.
• The company has an incredibly strong balance sheet with a quick ratio of 6.4x. Management has identified resumption in its M&A strategy as well as increasing its share buybacks as its main uses of capital.
• TRIB continues to display a strong combination of both value and growth in its investment thesis. Key stock catalysts for this year will be further commentary regarding the FDA and TRIB’s Troponin and BNP products as well as earnings-accretive M&A at reasonable multiples.

For 1Q16, this continued to be the case. Gross margins compressed 480 basis points as TRIB struggled to balance volume and price in a turbulent FX environment. Currency translations also proved to be a net negative. Additionally, the company had to absorb fixed production, labor and overhead costs. Higher margin HIV sales also were lower than usual. The company’s reported numbers and overall core business should turn around as weak comps get lapped and the FX environment stabilizes. The company is also entering its peak sales season for Lyme disease.

Moving further into the positives, TRIB continues to be in dialogue with the FDA regarding its cardiac products. Troponin trial data has produced numbers that are unprecedented and have exceeded Abbott’s current product in the market with sensitivity of 66% and specificity of 94% vs. Abbott’s 32% and 92% respectively.

The FDA has tightened approval regulations, which has been the reason for the long timeline for marketability. However, TRIB remains confident that its Troponin product will receive approval, which will give the company a significant barrier to entry in a currently underpenetrated market. Most recently, the FDA has submitted questions and comments to TRIB, which the company is currently reviewing and addressing. The company remains on track to receive approval by the end of 2016 while also seeing improved core business levels in the meantime.

What has the stock done lately?
The stock has returned 4.1% since the AIM International Fund bought it in mid-March. Shares are basically flat YTD, returning 0.9%. The company is trading at an actual LTM P/E of 12.5x, a major discount compared to the rest of the healthcare broad sector.

While its consensus NTM P/E of 30.2x seems high, this is likely due to analysts losing patience in both FDA approval and the recovery of the core business. Strong bolt-on acquisitions, further share buybacks and an increasing dividend will likely to beneficial to TRIB’s stock price as these strategies would satisfy its institutional shareholder base.

Past Year Performance: TRIB has decreased in value by 28.9% in the last 52 weeks. AIG has increased 14.25% in value over the past year, but the stock is nonetheless on the bargain table: AIG's market valuation implies a ~19% discount to Q3-15 accounting book value of $79.40/share. Buybacks below this book value level continue to make a hell of a lot of sense in the framework of growing shareholder value. 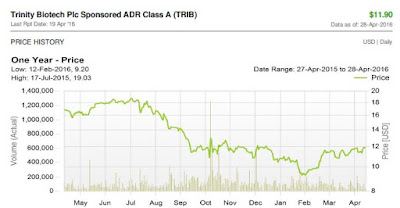 My Takeaway
As stated earlier, TRIB exhibits both growth and value characteristics. As the company laps weak comps and sees recovery in its core business, analyst estimates will inch higher. Bolt-on M&A and continuing returns to shareholders via dividends and buybacks will also satisfy investors. However, the main key for TRIB’s stock price will be commentary and ultimately approval of its cardiac devices. The company continues to be a long term play with a significant upside. 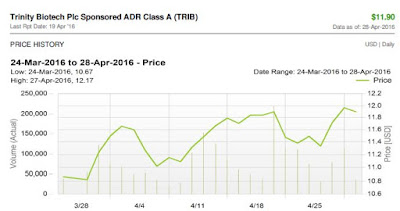