Thanks to the continuing generosity of Dan Tranchita (MU ’85, MBA ’86), six AIM students and Dr. Krause were able to attend a special event at the Wisconsin Club on Thursday, September 16. The Wisconsin Province Society of Jesuits sponsored breakfast and an engaging discussion between Chris Lowney, author of Heroic Leadership, and Steve Jagler, Executive Editor of Biz Times Milwaukee. 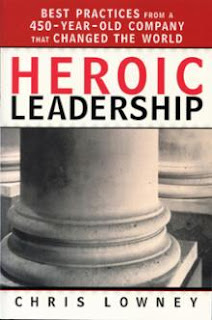 Chris Lowney is the bestselling author and lecturer on leadership, ethics and inter-religious dialogue.  His books, “Heroic Leadership” and “Heroic Living” were inspired by the teachings and writing of St. Ignatius. Lowney offered leadership lessons from a 450-year-old company that grappled successfully with the same challenges that test great companies today: forging seamless multinational teams, motivating inspired performance, remaining “change ready” and strategically adaptable. That company? The Jesuits, the religious order founded by Ignatius of Loyola.
According to Lowney, “The very last thing the Jesuits would have considered themselves to be was leadership pundits. Instead of talking about leadership, they lived it.” Lowney, a former Jesuit seminarian who “morphed into the corporate man” after leaving seminary for a job at J.P. Morgan, saw that the Jesuit approach to molding innovative, risk-taking, ambitious, flexible global thinkers worked—better than many modern corporate efforts do today.

Praise for Heroic Leadership has been widespread. “Entertaining and well researched, this is a must-read for any business leader, and an inspirational read for anyone who wants to be a better human being,” said Walter Gubert, Chairman of J. P. Morgan Chase. “Lowney does a wonderfully engaging job of making clear the connections between our current leadership challenges and the principles employed so effectively by the Jesuits,” commented Edward Kelly III, President and CEO, Mercantile Bankshares Corporation.
Dr. David Krause, Marquette’s AIM program director said, “This was a fascinating conversation. Lowney and Jagler discussed how Jesuits, for over 450 years, have produced both outstanding individual leaders and a culture of leadership. Their discussion focused on the ‘four pillars’ of personal leadership Lowney learned in his Jesuit studies: self-awareness, ingenuity, heroism, and love. The event was enjoyed by my students who I am certain are pondering how to put these principles into practice.”