Wintrust Financial Corp. (WTFC, $61): “Winning My Trust through Growth”
By: Brendan Hopkins, AIM Student at Marquette University
Disclosure: The AIM Equity Fund currently holds this position. This article was written by myself, and it expresses my own opinions. I am not receiving compensation for it and I have no business relationship with any company whose stock is mentioned in this article.

·         WTFC has grown substantially through acquisitions and taking on new loans, but simultaneously have increased expenses as they expand their business. This growth will likely result in increased performance and profitability of the firm, but it is necessary to recognize the increase of risks attached with it.

Key points:
Wintrust Financial is setting itself up for continued success. Over the past few quarters, growth has been a goal of management and they have gone out and executed. WTFC has acquired several regional competitors, have organically grown their balance sheet, and have begun building momentum in the field of loans. On the last day of 1Q16, they acquired a regional bank in Foundations Bank and because of this, they experienced the related expenses in 2Q16. This past quarter they again made a strategic acquisition with First Community Bank of Elgin, which provides them with 100% market overlap in this community and will allow them to experience cost savings once the bank is converted and moved out.

Beyond these acquisitions, Wintrust has emphasized the importance of increasing their activity within the loan market. This past quarter they announced an agreement to buy more than $500M of GE’s franchise loans, which will close in the middle of 3Q16, bringing WTFC’s overall portfolio to just shy of $1B. Currently the loan pipeline is at an all-time high and this agreement will serve as a strong first step for Wintrust as they plan to get momentum going and increase their activity within the loan industry. As for organic growth, WTFC has increased their activity in the field of mortgages but recognizes the need to improve their technology as expenses have nearly doubled over the past 3 years. Upgrading this technology will increase short term cost but will allow for lower overhead costs in the future with improved efficiency.

With this growth, costs have increased substantially and most of these expenses will be realized in upcoming quarters. To support their growth through acquisitions, the increase in loans, and organic balance sheet growth, WTFC sold 3 million shares of common stock, which raised $152.8M towards the end of 2Q16. Core funding growth is strong with deposits growing, credit quality improving, and WTFC has not had to rely on institutional money.

What has the stock done lately?
Recently, the stock has not seen a large amount of fluctuations or anything that requires any concern. In mid-April, the stock rocketed in an upward trajectory and has consistently risen since this time due to management decisions and earnings success. I believe that it is likely this stock will continue to improve and perform strongly through the rest of 2016 and the early part of 2017.

Past Year Performance:
Over the past year, the stock’s price has been relatively volatile with a 52 Week Range of $37.96-56.68 and currently trading near it’s high at $53.98. WTFC has floated around a price of $50, but had a sharp drop in the beginning of the year and remained low throughout the first quarter which aligns with the financial sector at this time. The P/E achieved throughout the year has also mirrored WTFC’s segment as it has floated around 16X. 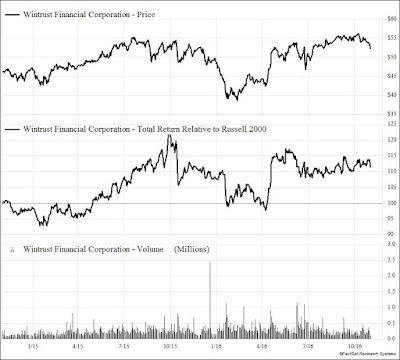 My Takeaway
Wintrust’s performance over the past year is extremely impressive. They have demonstrated the abilility to grow both organically and through acquisitions, while at the same time continuing to maintain profitability and a strong balance sheet. The stock was originally pitched in 2013 with a price target of $52.04 but has since exceeded that price and will likely reach new highs, so it is recommended that we either hold or even look into increasing our position.

The three investment thesis’ utilized when WTFC was originally purchased are all still in play with acquisitions already occurring and more than likely to continue, interest rates not being hiked to anything significant, and the US economy has not strengthened significantly (depending on who you are talking to). I believe that WTFC will continue to expand, be profitable, and that a price near the current $61 is not anything to shy away from.