An AIM International holding: Vodafone Group (VOD) by Anthony DiSanto. “Waiting to See the Impact of Brexit on VOD"

Summary
Key points: Due to Brexit, the stock has been unfairly punished and has been declining since the event occurred. This is increasingly devastating because VOD, upon the completion of Project Spring, was beginning to realize the fruits of their labor with recovery in European sales.

Regardless, they are continuing to push forward with the expansion of their fixed line and mobile services. Currently, they realize over 21% of their revenue from fixed line and the majority of their growth is from data. The average usage of data per consumer has growth to 1.1 GB, which VOD plans to capitalize on. This has been shown by the number of 4G growth over 100% to 4G consumers growing by over 100% to 53 million users in the last quarter.

To maintain their competitive advantage and continue to profit from the increase in data consumption, VOD has been investing in improving the efficiency of their networks. They also are forging ahead with the internet of things and making sure their networks can support multiple devices. On the fixed line side, they want to provide gigabit speeds as well as providing new services to homes and offices at attractive prices.

Next year Vodafone plans to introduce Narrowband IoT, improving their signal strength by six-fold and in addition to upgrading their fixed line to DOCSIS 3.1, which offers multi-gigabit speeds. VOD also plans to update their billing and CRM system to improve internal efficiencies. Furthermore, by 2020 they will have 5G operating in the first few cities and will begin a migration of 3G to 4G.

What has the stock done lately?
Over the las month the stock has declined and took a beating at the end of October. Ofcom, the regulator and competition authority for the UK communications industries, fined VOD £4.6 million for breaches of consumer protection rules. Outside of the UK, Vodafone is positioning itself to secure a large merger in the Netherlands with Ziggo, by selling their Dutch wireline operations. If this passes in addition to a positive earnings release next week, November 15, the stock could turn around.

Past Year Performance: VOD has decreased 15.88% in value over the past year. The UK based telecom provider has faced hardships, mainly due to the Brexit which occurred in June. Until that decision was made, VOD realized 7.53% in stock appreciation since December 31st. Since then it has moved sideways for the most part, with some uncertainty from the bidding war in India and the recent fine, driving the price down further. 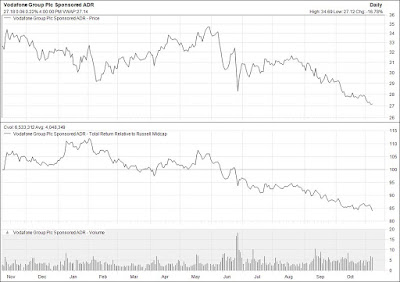 My Takeaway
Although VOD has taken a big hit with the Brexit, I believe that with their improvements from Project Spring and growth of their consumer base they will post positive earnings next week. The uncertainty of what will occur with Brexit after news was released that Parliament must vote on whether the UK can leave or not has continued to weigh on the price of VOD. Additionally, the upgrades to fixed-line, signal strength, and overall firm will bolster results going forward. 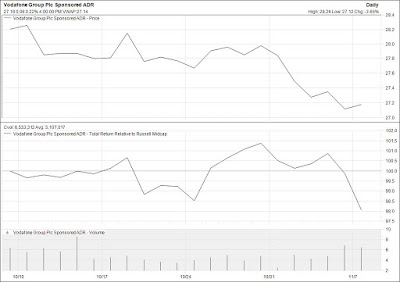 Source: FactSet
Posted by AIM Program at 7:13 AM