Updated November 23, 2016 - The Marquette University's Fed Challenge team advanced to the final round of competition in the Chicago Fed Challenge earlier this week.

This year’s Fed Challenge team finished 3rd out of 14 teams! The final results were University of Chicago, Northwestern, Marquette, and University of Illinois at Chicago.

The College Fed Challenge is a yearly team competition for undergraduate college students inspired by the working of the Federal Open Market Committee. 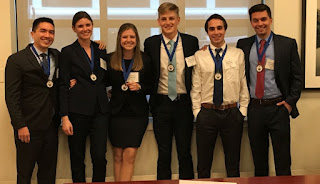 The competition is intended to encourage students to learn more about the U.S. macro economy, the Federal Reserve System and the implementation of monetary policy.

The Fed Challenge is a team competition in which students analyze the state of the U.S. economy. This year's team role-played the PBS show Charlie Rose. Specifically, Charlie Rose (played by Alec Hagmann) discussed the state of the U.S. economy with key economic players. His guests included the Chair of the Board of Governors of the Federal Reserve System Janet Yellen, President of the Federal Reserve Bank of Boston Eric Rosengren, IMF Managing Director Christine Lagarde, and CEO of JPMorgan Chase James "Jamie" Dimon, played by Lauren McCain, Michael Dennison, Tara O'Byrne, and Nate Penn, respectively.

The College Fed Challenge also aims at promoting interest in economics and finance as subjects for advanced study and as the basis for a career. Competing against some of the strongest economics programs in the Midwest, the Marquette team (with two AIM students) competed against such powerhouses as the University of Chicago and Northwestern University in the 2016 regional College Fed Challenge at the Federal Reserve Bank of Chicago.


The annual competition tests students' knowledge and understanding of monetary policy. The event attracts universities in the Midwest and the winner goes on to nationals at the Federal Reserve Board of Governors in Washington, D.C. to compete against winners of the other regions.