Vina Concha Y Toro S.A. ADR (VCO, $34.40): “Green Prospects for This Red Wine”
By: Dominic Delia, AIM Student at Marquette University
Disclosure: The AIM Equity Fund currently holds this position. This article was written by myself, and it expresses my own opinions. I am not receiving compensation for it and I have no business relationship with any company whose stock is mentioned in this article.

• Vina Concha Y Toro S.A. ADR (NYSE:VCO) is a vertically integrated, international producer and exporter of wines headquartered in Santiago, Chile. The company offers a diverse array of brands including Casillero del Diablo, Don Melchor, and the Fetzer portfolio of brands.
• VCO’s most recent earnings report revealed notably improved fundamentals and unprecedented margin expansion, despite missing consensus expectations on both revenues (2%) and EPS (3%).
• Recent industry tailwinds are expected to subside in 2H16, after gross margins surprised on the upside in Q216 due to lower grape input prices and foreign exchange benefits of a weaker CLP.
• VCO’s recent achievement as the only wine company included within the Dow Jones Sustainability Index 2016 personifies the AIM Program’s recent emphasis on ESG investing.
• With extremely low trading volume catalyzing the majority of price fluctuation, VCO’s inevitable inclusion on a major index should help to quell volatility.

Key points: Concha y Toro’s performance has remained relatively flat since it was added to the AIM International Portfolio this past May. Its low trading volume has subjected the stock to technically catalyzed movements in price and overshadowed the firm’s markedly improved fundamentals. Despite these unforeseen headwinds, two of the original drivers (Shifting Demographic Trends & Overlooked Chilean Economy) have yet to play out, as these macroeconomic factors tend to have much longer time horizons.

When Q2 earnings were announced in late August, margins expanded (Gross Margin +170 bps along with EBITDA margin +170 bps YoY) through both decreased input costs and massive increases in volume across all facets of the business, most notably in Canada, Mexico, and Asia. The recent acquisition of the Fetzer portfolio of brands is also proving to be synergistic, with YoY sales volumes increasing by 12.1% and showing signs of sustainable momentum.

Looking forward to 2H16, VCO will need to rely on sustained volume growth domestically, as the Chilean economy pulls itself out of recession and begins to expand, as well as in the Asian and North American markets, after the tailwinds from a weak Chilean Peso and depressed grape prices were realized in the first and second quarters of 2016.

Over the past quarter, Concha y Toro has seen an 8.40% increase in price ($31.74 to $34.36) from its late June trough, as consumer staples had continued their rally into mid-August. Despite a recent sector slowdown, the announcement of 2Q16 financial results further buoyed the stock price, as YoY volume growth coupled with margin expansions provided a pleasant upside surprise to investors.
The company recently announced a new bond offering to pay down debt and increase capital expenditures, demonstrating a focus on cleaning up the balance sheet while preparing its facilities and vineyards for continued volume growth over the next three years.

Past Year Performance: Over the past twelve months, Concha y Toro has grown a meager 1.95%, while overcoming a 20% drawdown in 4Q15. During this time, the Chilean economy was reeling as fears of a sustained Chinese growth slowdown had driven copper (Chile’s main export) to historically low prices. Chile has weathered the storm by slowly transitioning to a more service based economy, and the company has reaped the benefits of the country’s weakened currency in the meantime. 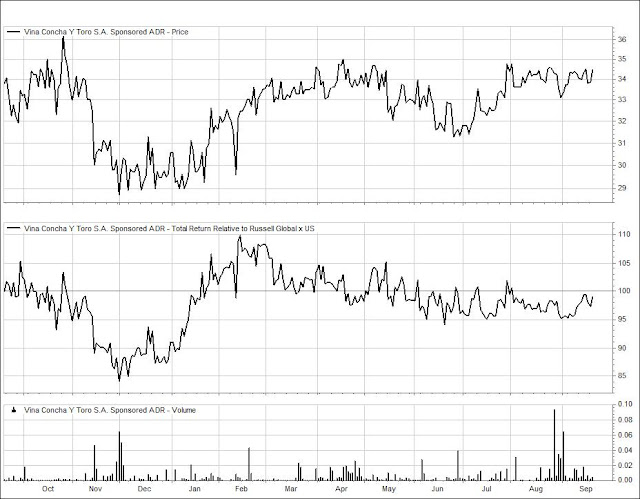 
Despite the stagnation of global growth over the past year, Vina Concha y Toro has been able to grow its brand presence globally as evidenced by the YoY volume growth in newer markets such as Asia and Australia. Management adeptly positioned the company to take full advantage of both commodity and currency tailwinds in 1H16, while cementing the firm as a model for reputation and sustainability within the industry.  I recommend the fund continue to hold Concha y Toro while patiently collecting the dividend and waiting for my initial investment thesis to play out.
Posted by AIM Program at 1:40 PM