An AIM Equity Fund Holding Update on RSP Permian (ticker: RSPP) by Casey McClelland. "This firm should thrive in a rising or stable oil price environment"

• RSP Permian (NYSE:RSPP) Operates as an oil and gas, exploration and production company (E&P), headquartered in Dallas, Texas. The company primarily operates in the Permian shale formations, specifically in the low cost Midland Basin.
• RSPP is benefiting mightily from the oil price rebound in the first half of 2016 with a near 70% increase since the all-time lows we saw in the beginning of the year.
• Improved completion strategies have led to management increasing year end 2016 oil production.
• Continued operating efficiencies and $45 oil prices contributed to $58.5 EBITDA which beat consensus estimates of $54.4 and surpassed their capital expenditures of $57.6.
• Due to the positive sentiment in the market and the quality land positions that RSSP has to offer, the stock has been pushed to all-time high prices.

Key points: RSPP is the owner of some the most premier assets for shale production in the country. Their Midland Basin provides them with an elite low cost play that has them positioned exceptionally in the current tumultuous oil market. If there is price stability and continued growth, this company has the assets and history of past execution to grow immensely.

Since the IPO of RSPP, the company has been able to continue to increase production year after year as they continue to develop their Midland asset. This will only improve with the recent bolt on acquisitions during 2016 that they paid $55 million for. This acquisition was done to add to their current asset base and untapped inventories. With the flexibility in their balance sheet and the continued improvements in the marketplace, RSPP has the ability and the wherewithal to add quality assets to their base.

Along with the low cost asset base that they have continued to expand, RSPP has been technologically sound in the production of their wells. They operate primarily through horizontal laterals and in the past quarter have seen operational efficiencies materialize in 20% outperformance of the weighted average internal type curve.

With the addition of a third rig in 3Q16, RSPP has made an aggressive stance on production for the second half of the year and their increase in CapEx spending is indicative of that. Their confident attitude to their market is on par with our other E&P holding CRZO, who also raised production and CapEx guidance.

What has the stock done lately?
In the past 3 months, the stock has performed moderately well with a 13% return over that time frame. This is mainly due to a recovery in the market after the shock of the Brexit. Along with the recovery, RSPP reported decent numbers and had a positive outlook on their position in the market. 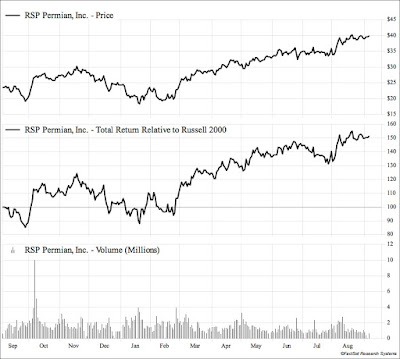 Past Year Performance: Since the introduction of RSPP in to the portfolio, the stock has performed extremely well and surpassed its price target early in its time in the portfolio. With help from the record price rebound, investing in the E&P industry in early March and April have proven to be perfect entry points for the stocks. Since that point, our E&P positions have performed amongst the best of the stocks in the whole portfolio.

My Takeaway
RSPP is a company that operates efficiently and has assets that are unrivaled by most industry peers. With the continued recovery in the market, there are few companies that will have the ability to perform better in the U.S. shale market. Macroeconomic factors are continuing to become clearer with positive news out of Iran on their production and Russia recently coming out in support of a production freeze with OPEC. RSPP would thrive in a price stable environment and should continue to be a positive performer for the fund.