ScanSource, Inc. (NASDAQ: SCSC) is a distributor of specialized technology hardware, including communications, security and point-of-sale/barcode products. ScanSource sells its products through partner vendors, such as Zebra and Honeywell. The company operates in two segments, Worldwide Barcode and Security and Worldwide Communications and Services segments, representing 67% and 33% of revenue, respectively.
SCSC reported FY financial results on August 29, with revenue and EPS falling short of street and company estimates.
Fourth quarter gross margins faltered, falling to 9.4%, a 60 bp miss on guidance, coming from increased costs and an unfavorable product mix in the company’s Worldwide Communications & Services segment.
In October 2015, management assembled a “search committee” to identify potential avenues for building a recurring revenue business within the company. Announced on the Q4 earnings call, the company acquired Intelisys, the market leader in the telecom and cloud services market.
While the company achieved 4% y/y increase in FY EPS at $2.71, the bulk of the growth was driven by 1H strength, and should make for tough compares moving into FY2017. With the stock taking a shellacking, faltering ~20% on earnings, I still see numerous headwinds for the company moving forward. Due to an uncertain market landscape and a growing reliance on acquisitions, investors will likely continue to watch from the sidelines until further notice.

Key Points: ScanSource reported disappointing fourth quarter sales of $877.5MM, vs street consensus of $911.1MM. Most of the weakness came from the company’s inability to secure deals within its barcode equipment business. After achieving a solid organic growth profile in recent history, the previous two quarters have proven to be tough from an organic growth standpoint. Fiscal third and fourth quarters saw organic growth slide to (1%) and (8%) on a y/y basis. In addition, management guided to another quarter of negative organic growth for the current quarter, which assumes continued weakness in both of its segments.

As organic growth appears to be a mixed bag, at best, moving forward, the company has more recently focused on acquisitions to fuel near-term growth. ScanSource’s acquisition of KBZ Communications in early 2015, which helped expand the company’s videoconferencing capabilities, has helped drive top-line results. The company expects near-term financial pressure from the integration of newly acquired Intelisys, but with the growing popularity and expectance of lifetime services, they are hopeful it can provide a much needed lift in the long term. However, leaning on these acquisitions to fuel growth could prove to be a risky bet, especially as KBZ prepares for a critical bid process for further government business.

The company’s barcode business suffered setbacks during the quarter, as retailers began to delay their bigger spending projects. Driving the company-level revenue disappointment, the barcode networking segment was dragged down by smaller deals and fewer wins in North America within its key vendor space. With a generally tough brick-and-mortar retail environment, its barcode and point-of-sale technologies could potentially see a lift from retailers more aggressively managing the supply chain. As such, management outlined its strengthening expectations for the first half of the current fiscal year, as larger deals could be achieved between ScanSource and its vendors.

What has the stock done lately?
The two largest shareholders, Fidelity and Blackrock, trimmed their positions in the stock after the most recent earnings call. A good indication of recent volatility, the Bollinger Bands on the company’s publicly traded equity have widened significantly since the full-year earnings announcement. The stock currently trades at $34.88 as of market close on 9/8, hitting a three month low, but still significantly above its CY16 trough of $28.34.

Past Year Performance:
The past twelve months have been somewhat of a bumpy ride for investors, with the stock approaching a five year high before a disappointing earnings announcement in August. The stock also hit a three year low on January 15, 2016. Overall return for the stock since the beginning of the company’s fiscal year is approximately flat. SCSC completed a $120 million repurchase plan during the quarter and approved a three-year plan for another $120 million repurchase over the next three years. The company’s valuation appears to be quite fair, trading at 7.8x EBITDA, in line with a peer average of 7.7x. 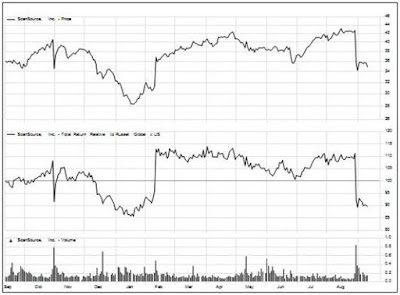 As legacy markets have slowed for ScanSource, the next twelve months will be crucial for investor perception. With nascent geographies, such as Brazil, doing much of the legwork for the company’s business segments, it will be important for the company’s North America business to regain some of its luster. Organic growth will be paramount in regaining investor confidence. However, the company’s footprint in the young 3D printing industry could provide investors with incentive to jump back on the boat, but will almost certainly require a wait-and-see approach after last month’s sell-off. 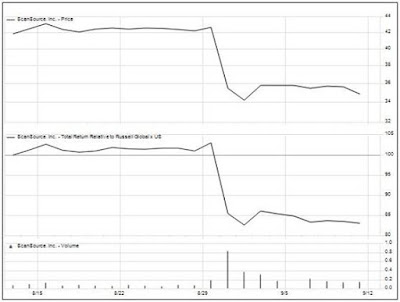