An AIM Equity Update on NTT DOCOMO, Inc. (DCM) by Anthony DiSanto. "Their new “+d” business hopefully will earn them an A!"

NTT DOCOMO, Inc. (DCM, $24.71):
“Did DCM peak, or is it only the beginning to something bigger?”
by: Anthony DiSanto, AIM Student at Marquette University

·         NTT Docomo, Inc. (NYSE: DCM) mainly provides telecommunication services in Japan, but also operates in the Smart Life Business, and in a variety of other businesses.

Since repositioning itself in FY2014 after witnessing a year-on-year decline in income, future growth has become DCM’s focus. This is explained through its attention to cost efficiencies. In 2015 DCM cut selling expenses and network-related expenses leading to an overall operating expense reduction of ¥0.3 billion.

DCM has also been focusing heavily on expanding its Smart-life and Other business segments, understanding that it will become increasingly difficult to expand through telecommunications. Thus, it is looking to create a membership-focused business for those who do not have NTT Docomo subscriptions. This is accomplished through “+d” in which DCM teams up with other entities, which will drive its Smart-life and Other business profits.

DCM is currently working on software through which it hopes to connect the world. In 2012, DCM released “Hanashite Hon’yaku” which translates words through voice recognition and that lead to “Jspeak” overseas in 2014. DCM established Mirai Translate, Inc. in 2014 to capitalize on areas previously untapped to it, such as tourism and other translation services. It hopes to establish technology that will perform real-time translation services to connect the world.

With the current devaluation of the firm after the announcement of stock repurchases, the price plummeted. However, after posting positive earnings and with the way DCM is performing quarter to quarter, it should be trending higher.

Since July 6, 2016, after NTT Docomo announced its share repurchase program of ¥500 billion, the stock has fallen 12.75%. The stock plummeted again at the beginning of August when it announced more share repurchases. Surprisingly after posting positive results in its annual report on September 9, 2016, the stock experienced a slight increase, before settling at $24.71 which is where it currently stands.

Past Year Performance: Over the past year, DCM has increased 37.66%, although mention was made it has gone through a price correction since July 6, 2016. In their earnings call they spoke about their new “share packs” targeting the families that used less than one gigabyte of data. This has led to an increase in ARPU, as mentioned above. Thus, the 37.66% increase is well deserved. 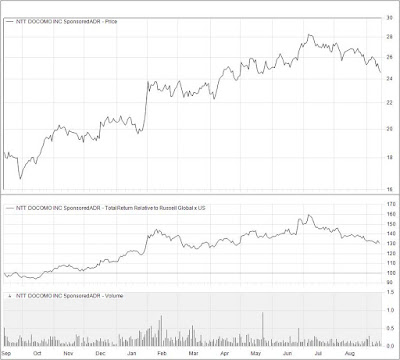 Although the stock has been going through a volatile period, I believe that the refocusing of the company puts it at a state for future growth. CEO Kazuhiro Yoshizawa focus on turning the company into a membership focused firm is intelligent, especially since telecommunications is becoming harder to squeeze profit from. Also, his installment of new share-packages and billing plans that target families are starting to bear fruit. Thus, I believe that DCM will continue to increase profit going forward, especially with their new “+d” business. NTT Docomo has already surpassed their future goals in expanding their non-telecommunication operating revenue and is on track to continue its growth. Thus, I believe DCM has opportunity to change its current trend and begin to increase in share price again. 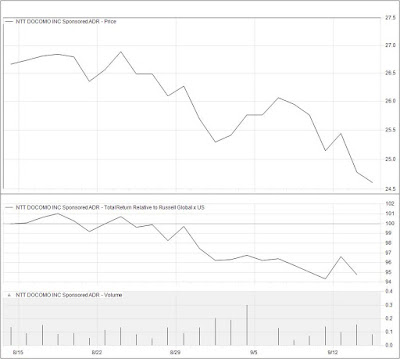