• MGP Ingredients, Inc. (NASDAQ:MGPI) has two reportable segments: distillery products and ingredient solutions. The distillery products segment is responsible for processing corn and other grains into distillery co-products and food grade alcohol. The ingredient solutions segment consists producing and distributing wheat starches and proteins.
• MGP’s Fibersym RW resistant wheat starch meets the criteria for FDA’s new definition of dietary fiber, which was in accord with the significant changes to food labels.
• Results of a study conducted at South Dakota State University showed that Fibersym wheat starch reduces risk factors associated with metabolic syndrome.
• Despite missing estimates for the second quarter, MGP initiates a quarterly dividend policy.
• After missing second quarter estimates, it looks as though MGP has intentions of continued long term growth.

Key points: The FDA has changed their definition of dietary fiber, and MGP’s Fibersym RW resistant wheat starch is included. The FDA is requiring significant changes to packaged food labels, and the new ruling comes into effect in July of 2018. Resistant starch is included under the definition of dietary fiber, and while isolated fiber is going to be required to show at least one beneficial physiological effect on humans, Fibersym demonstrates several. The vice president of research and development and chief science officer at MGP was quoted saying, “Results of several university clinical studies confirm the many benefits of Fibersym RW and identify the ingredient as an outstanding dietary fiber source.”

Not only did Fibersym make the cut as a dietary fiber, but a study conducted at South Dakota State University shows the Fibersym reduces the risk factors associated with metabolic syndrome, which approximately effects 34% of Americans. Symptoms of metabolic syndrome include high blood pressure, abdominal obesity, elevated blood sugar, and a high chance of developing heart disease and type-2 diabetes. Mike Buttshaw, the vice president of ingredients sales and marketing was quoted, “This clinical study proves once again that Fibersym RW-fortified food products are a smart dietary choice for consumers wanting to live a healthier lifestyle. Its growing use in a number of bakery, pasta, breakfast cereal, and snack products attest to its significant impact on American consumers.” Moving forward, we can expect the ingredient’s solution segment to grow due to the newly discovered health benefits.

Although earnings were lower than expected for the second quarter, a quarterly dividend $0.02 per share was issued, which was paid out on September 8th. Traditionally, MGP announces a dividend at the end of their fiscal year, but this was MGP’s way of telling the stockholders that positive cash flow will continue into the remainder of 2016 and beyond. They believe that putting in place a quarterly dividend will help deliver value to the shareholders and fortify their confidence in the company.

What has the stock done lately?
Before reporting the second quarter results, MGP hit an all-time high of $44.25 before it plummeted to $33.99 on August 16, 2016. Since then, it has slightly rebounded to a price of $40.51 as of September 7th. The strong decline in value was due to a decrease in net sales, operating income, and net income compared to the second quarter results of 2015. However, MGP’s YTD operating income is still 21.0% than the prior year’s numbers, which is an achievement in itself.

Past Year Performance: Since the initial purchase of MGP Ingredients on September 18, 2015, we have seen a 153.2% increase in value; even after missing analyst estimates in the second quarter of this year. In the past year, we have seen tremendous performance out of MGP, with only a few speed bumps along the way. Their sales and EPS have been relatively consistent, but have unfortunately seen little growth since the previous period. However, we have seen a large amount of capital expenditures in the past year with management expecting to spend approximately $24M by the end of the year, which should stimulate growth in coming periods. 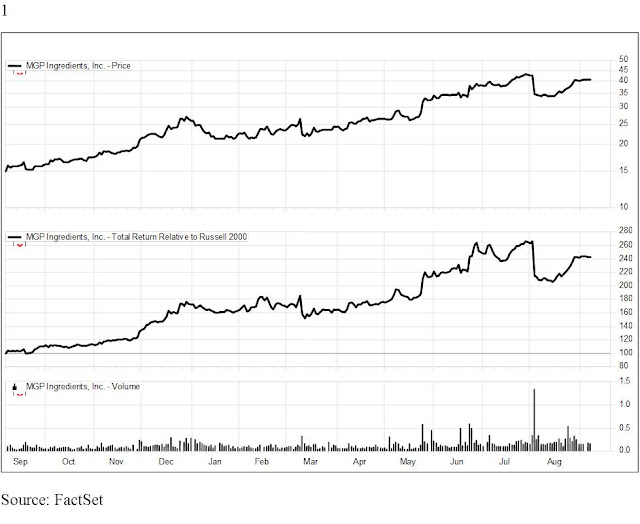 My Takeaway
Although MGP missed their EPS estimate of $0.40 and actually returned $0.37, I still have confidence in this company. The missed estimate was partly due to a weakening in their gross margins from 20.54% to 19.32%, which was due to an increase in cost of goods sold. If you look at the previous five periods, you will see an overall increase in the gross margin with some small fluctuations between the periods. Variations in cost of goods sold from period to period is common with consumer staple companies, and the gross margin should continue to grow moving forward. I also believe that the Fibersym RW will be a strong key driver, and will expand the ingredient solutions segment substantially for the periods to come. I have conviction in MGP Ingredients, and hopefully we will see continued strong performance in the future.